Day 2 was our day to explore the sights of Prague and have a little mooch without much direction. With a boat party planned for the evening, we got up early so we could explore as much as possible and then come back earlier to the apartment, having ample time to nap, eat and get ready.

Once we had figured out how to purchase tickets for the tram, (we brought ours from a small corner shop), we headed for tram 9 towards the old town. Onboard the trams you have to make sure you validate your tickets. Most days we got the 24 hour ticket which cost about 110 CZK and I believe it worked out that you needed to take 5 trips to make it worthwhile.

Not really knowing where we were but noticing it was getting a lot busier we realised we must be close to the town. We got off at what I know now is called the Legion bridge where we accidentally stumbled across the most stunning view of the famous Charles bridge. 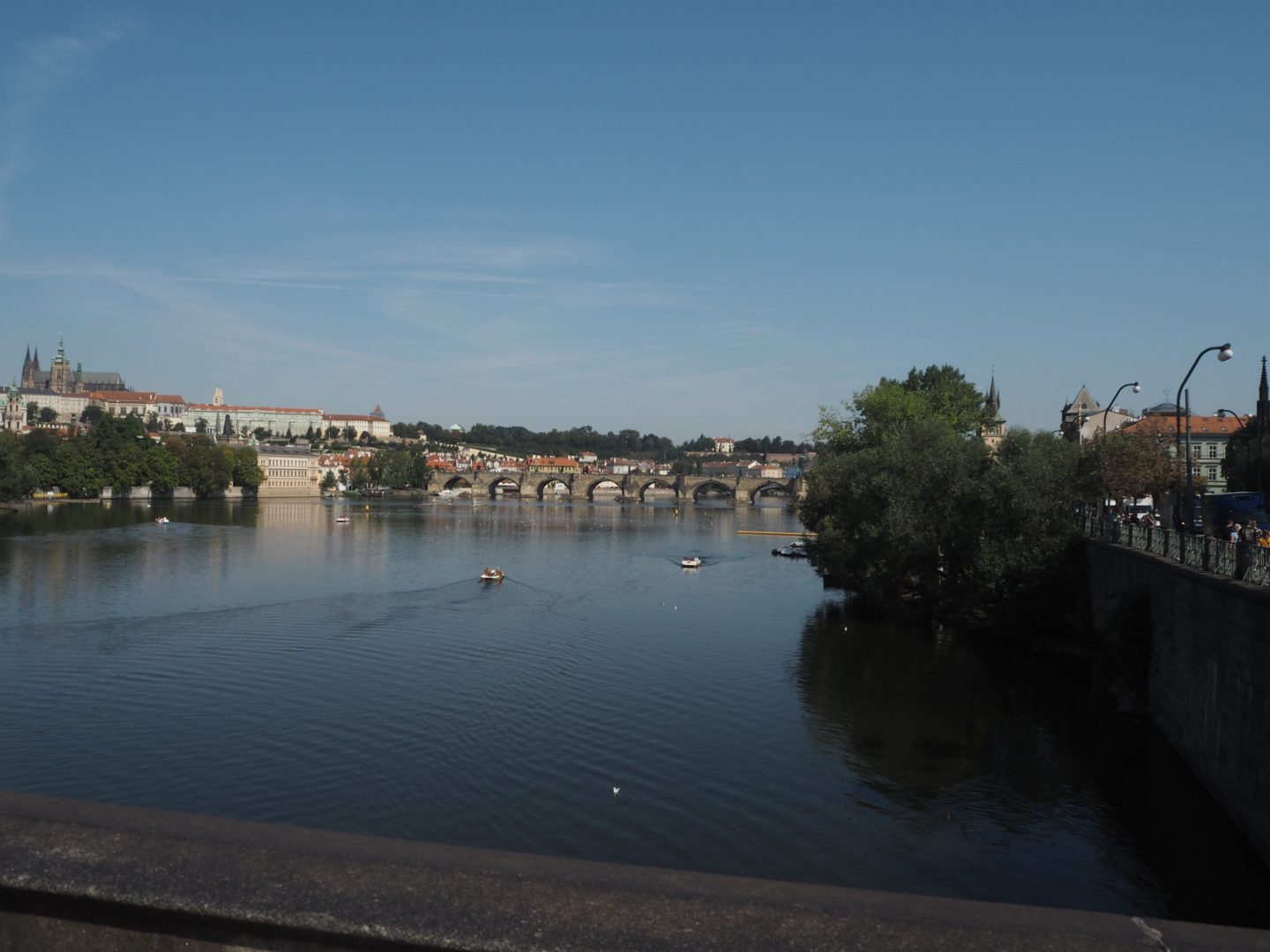 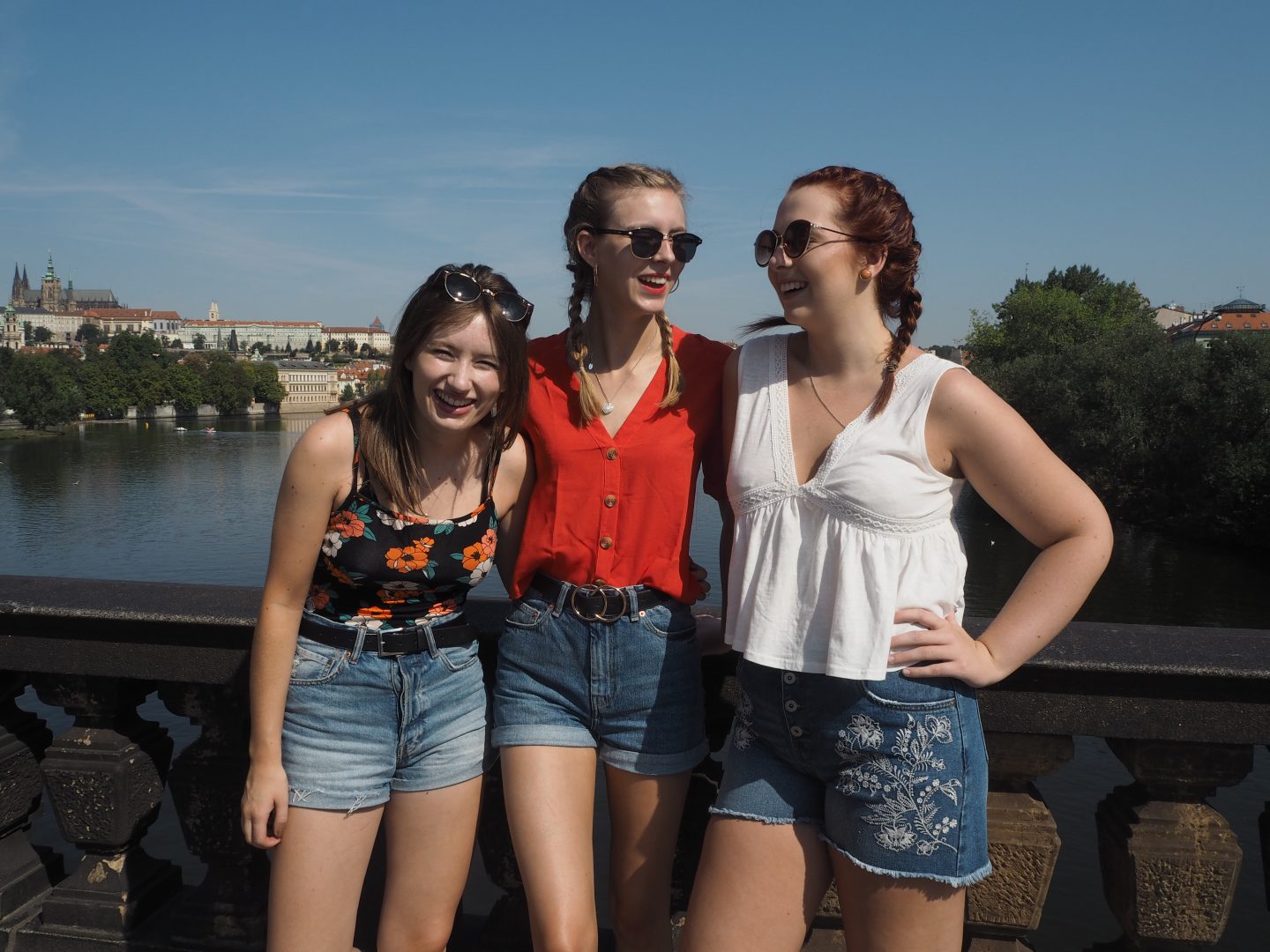 Below us, on the river we saw people paddling in boats which we had read about before and knew that it was something we wanted to do. We headed straight for them, as it was still quite quiet. There are a few companies along the river front with many different types of boats but we just headed towards the first sign we saw which cost us 350 CZK. We had an hour on a section of the river and we had so much fun just chilling and taking in our surroundings of the city from a different angle. 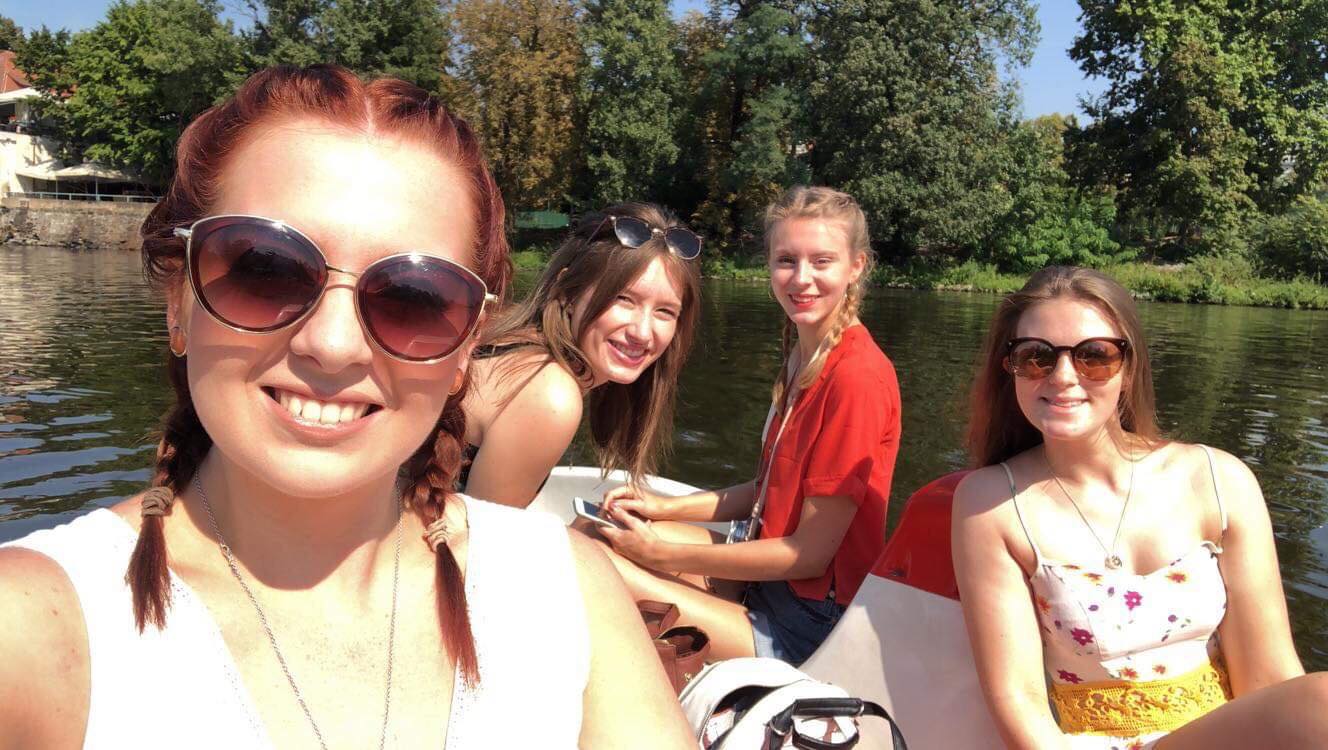 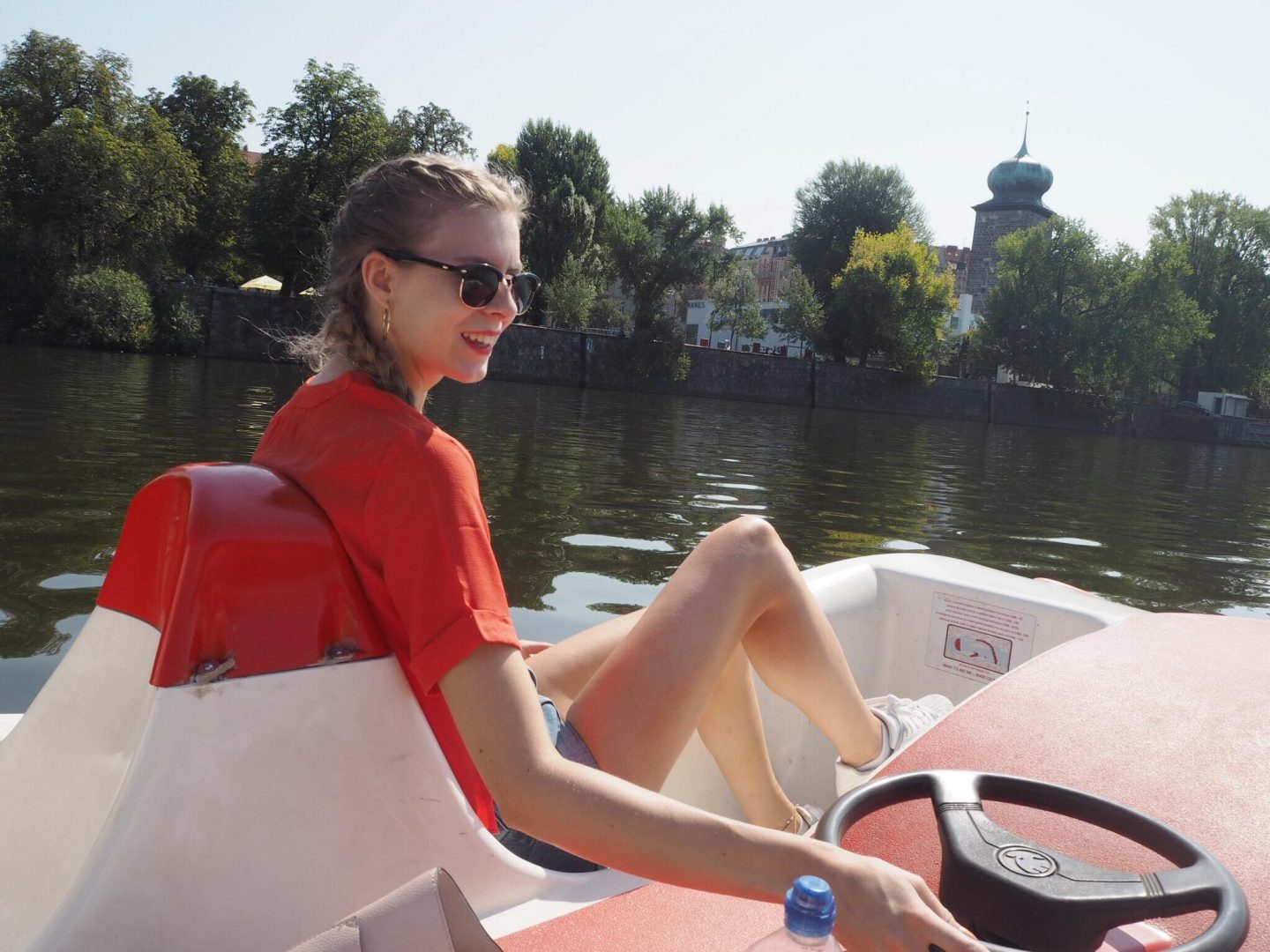 Once finished we headed straight for the old town, exploring all the allies and shops before reaching the main square. The main square has so much character with so much going on, I loved just taking it all in. Along the way Lil was doing quick sketches of the sights which was really amazing to watch, she’s too talented! 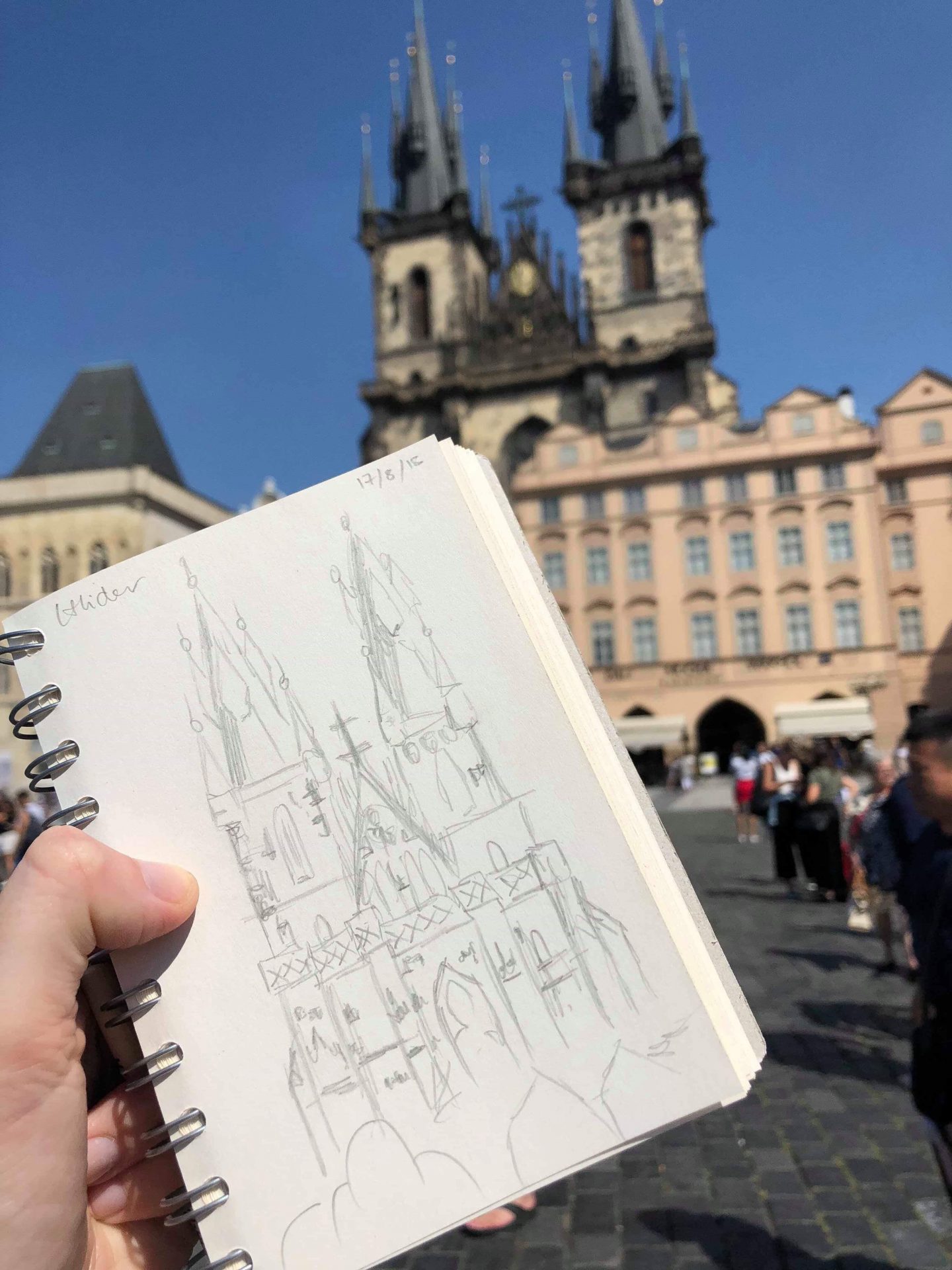 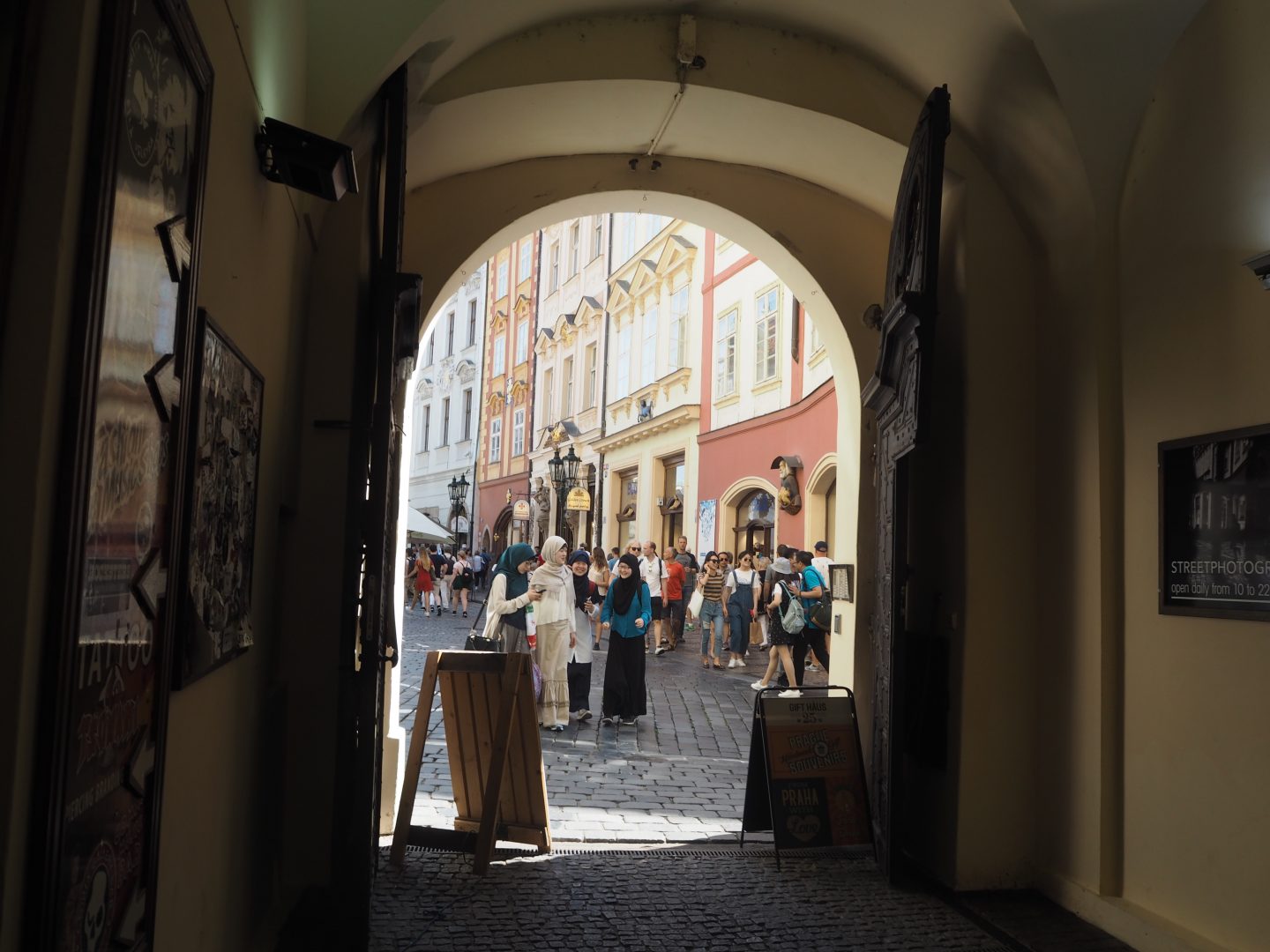 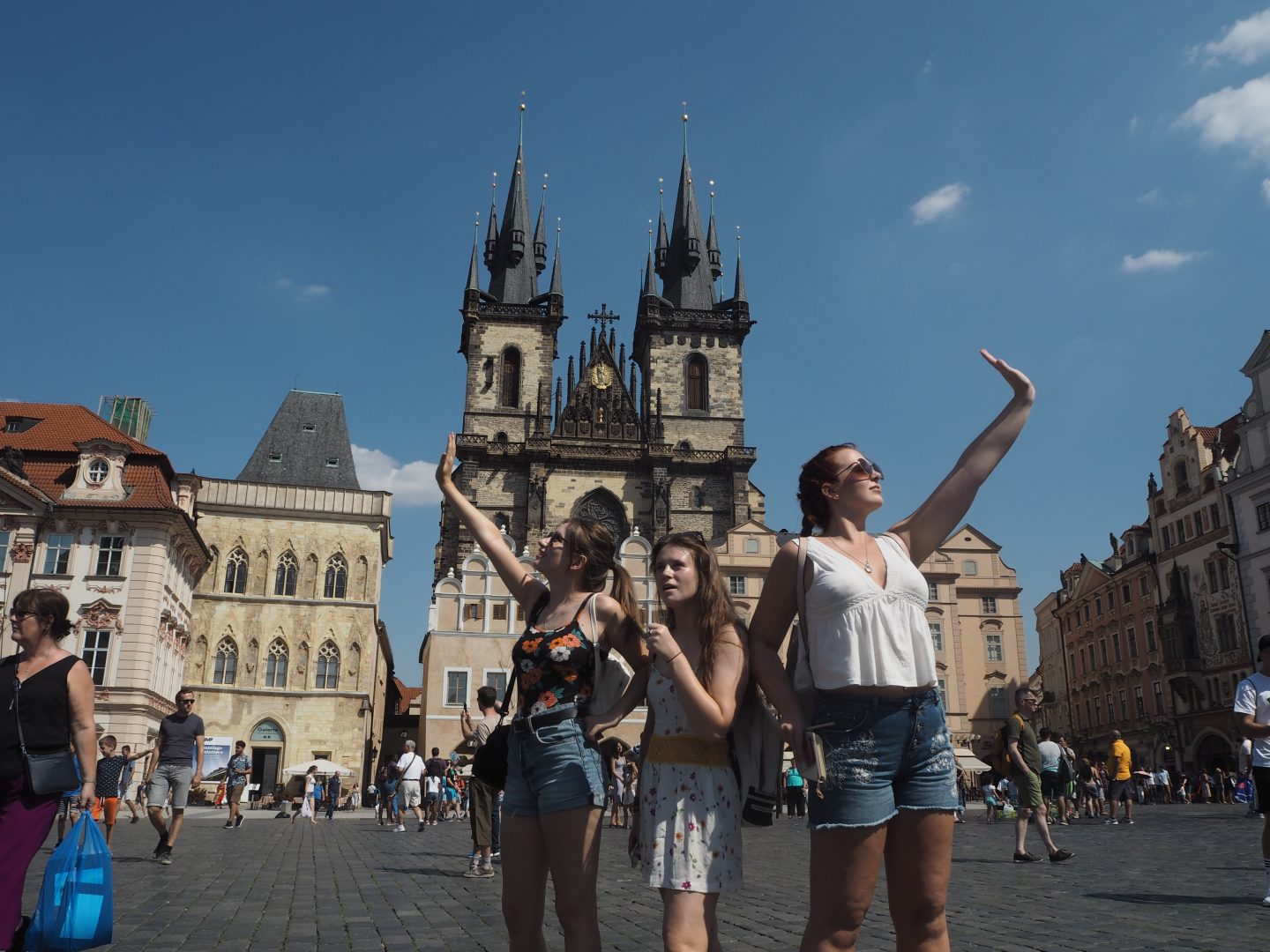 After building up an appetite from all the walking and our paddle session we wandered to find a nice place for food. We opted for a place which was right by all the market stools and watched the world go by whilst stuffing our faces because by this point we were very hangry.

With our hearts set on finding some delicious Trdelník chimney cakes for dessert, we worked our way back towards the bustling streets. Most of the pictures we had seen were from Good Food cafe so we went there as they looked so pretty. However we did pay slightly more for them there than other places we passed, which are literally scattered all over the old town so if you’re not that fussed about presentation there is little difference in taste from somewhere slightly cheaper. Shortly before we made it to Good Food, we got distracted by a snake in which Boon & Lily bravely held but be careful because the man charged something like 200 CZK each afterwards. hahaha. 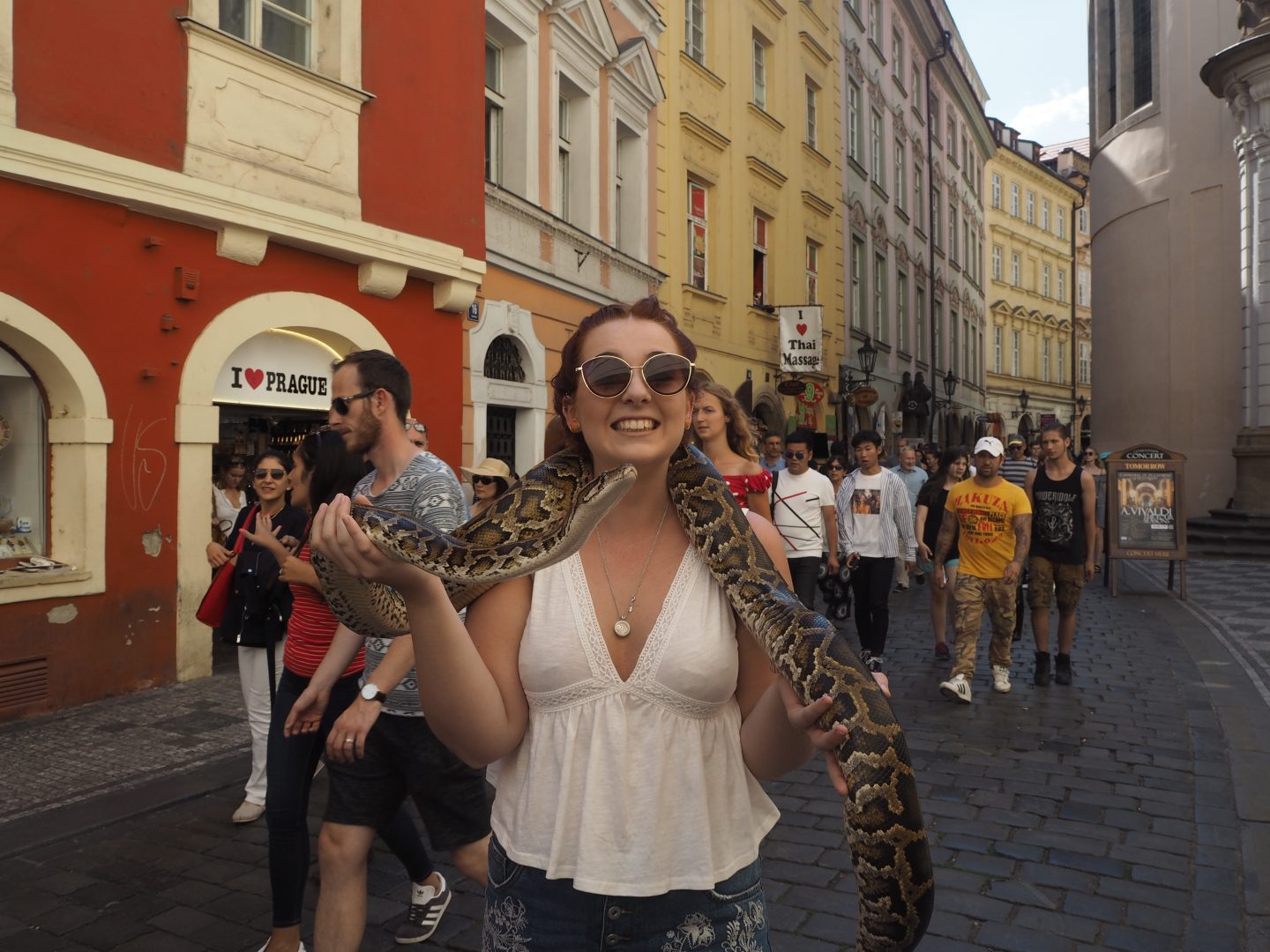 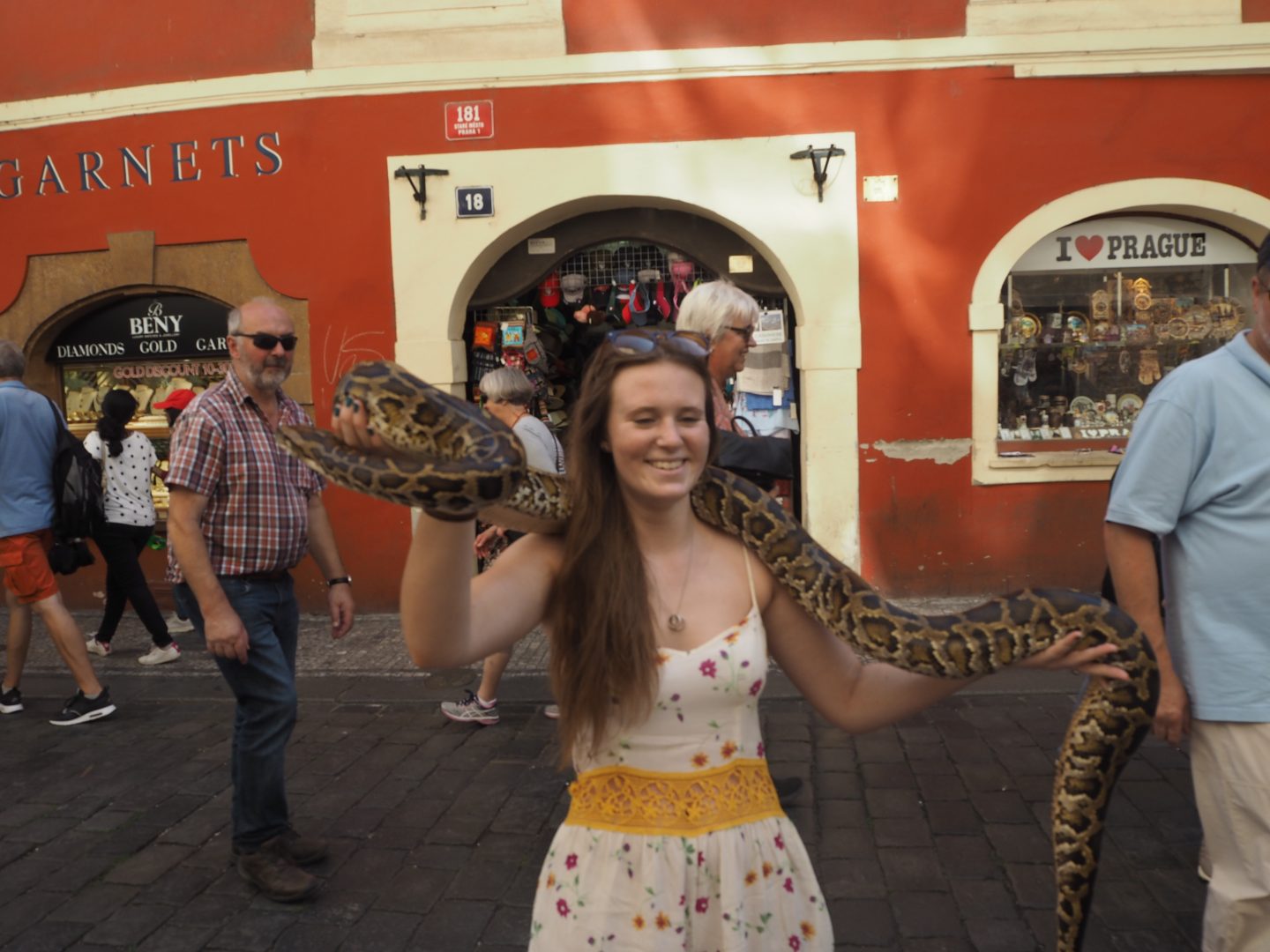 Once safely at a bench looking out over the river after Loren almost got completely wiped out by a tram, we sat and enjoyed our chimney cakes in the sun. Lil drew the most amazing sketch of the view and then we all did a minute and a half drawing challenge for a bit of fun. Safe to say Boon, Loren and I won’t be artists any time soon. 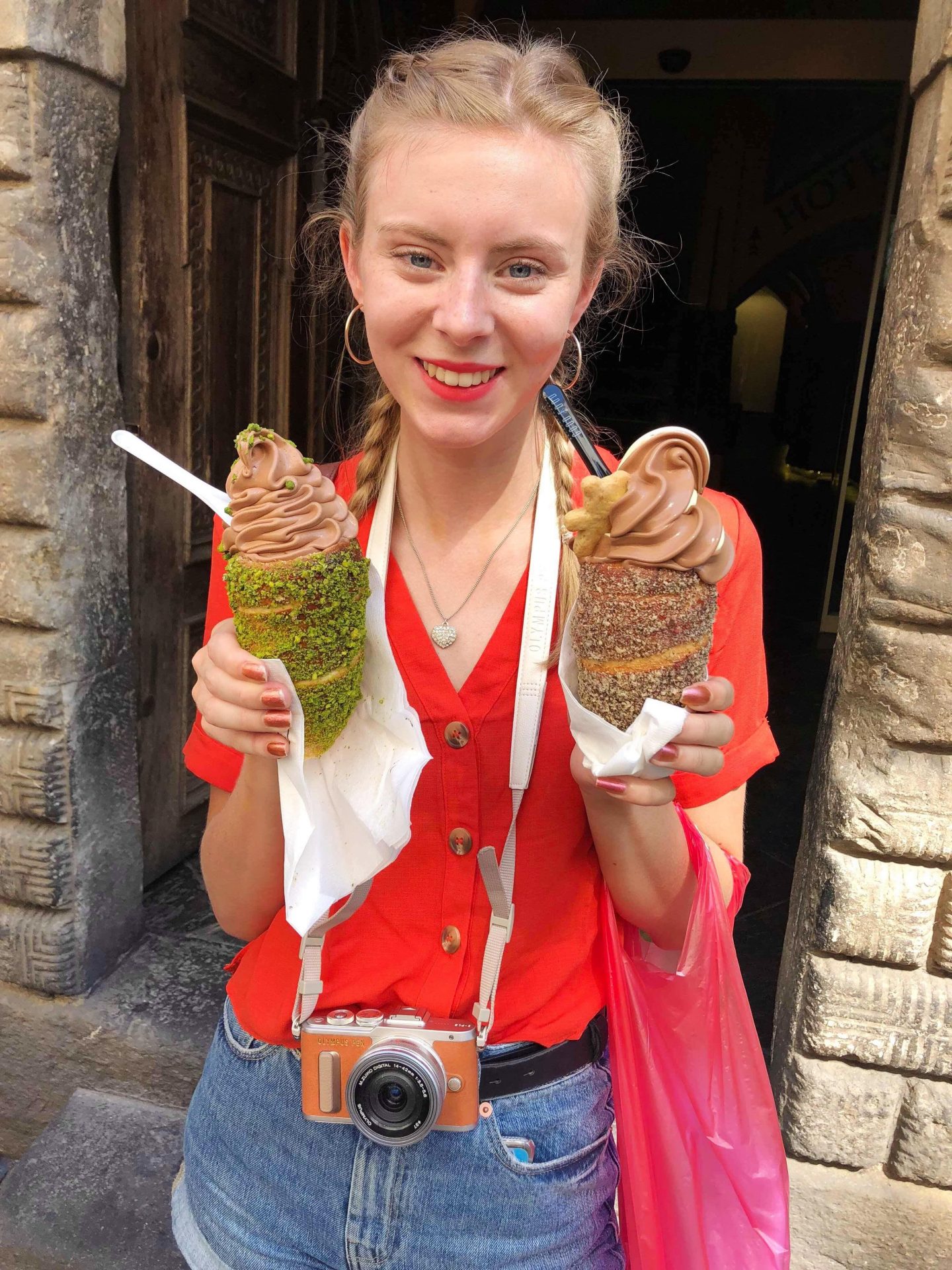 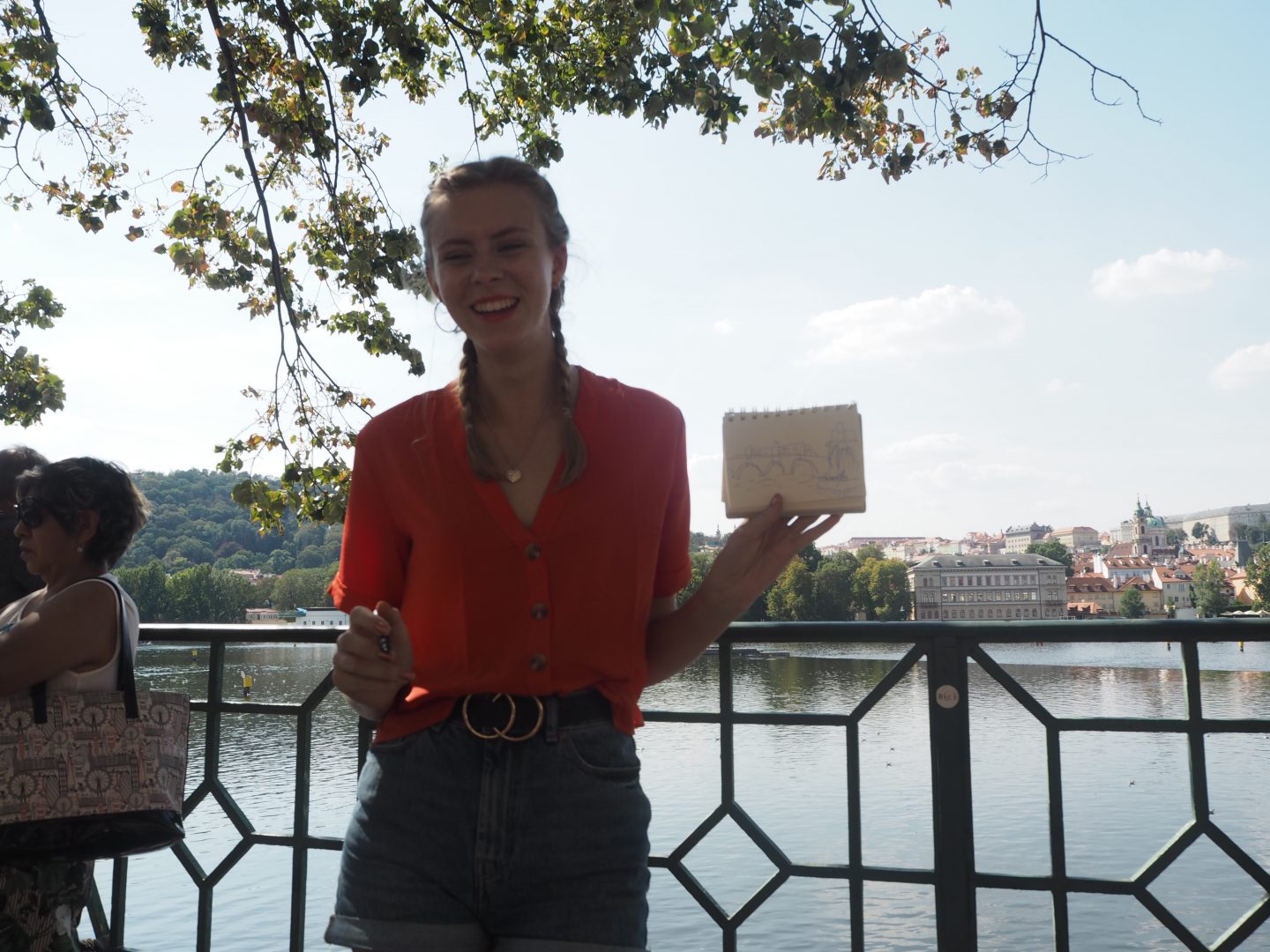 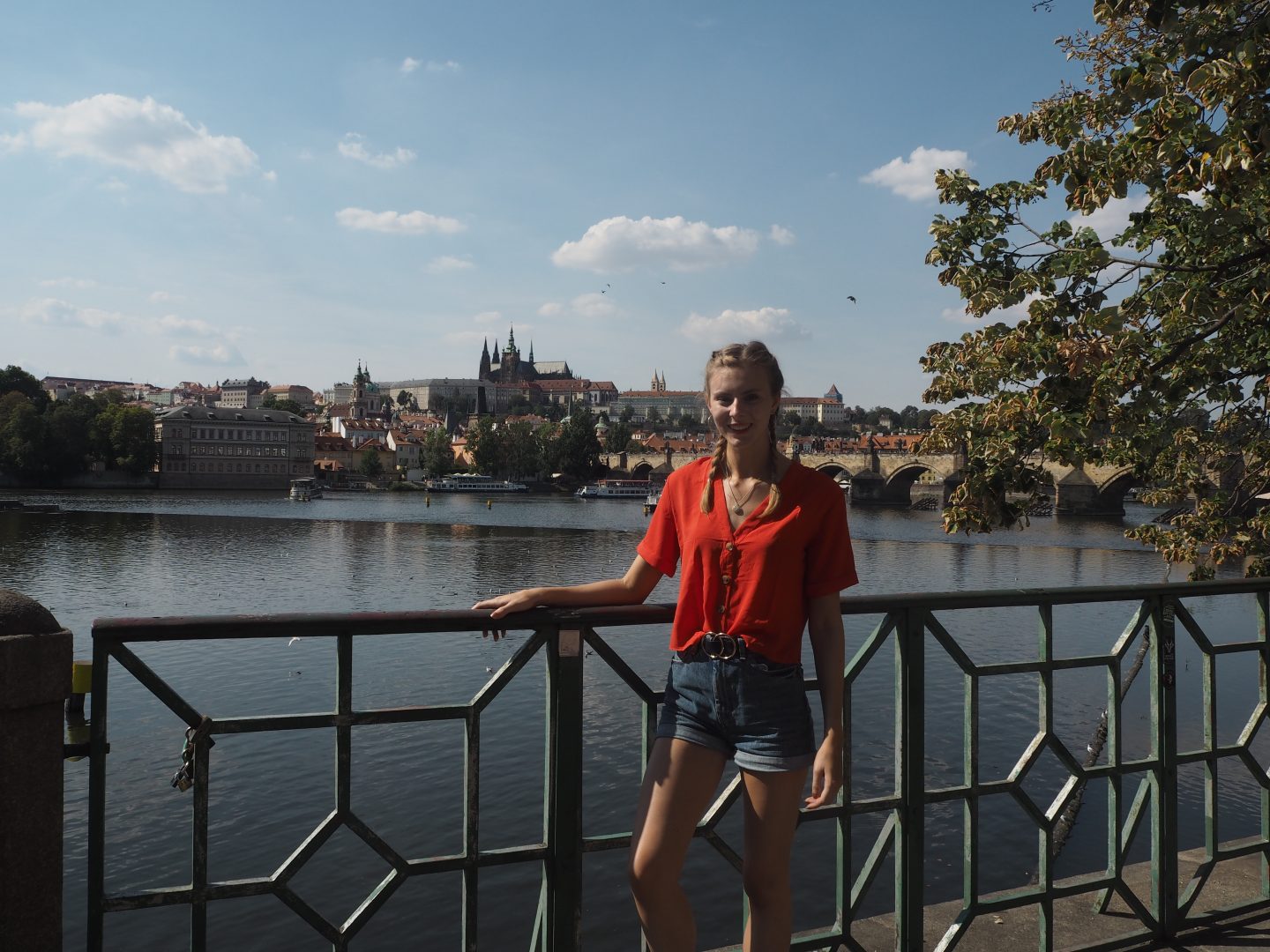 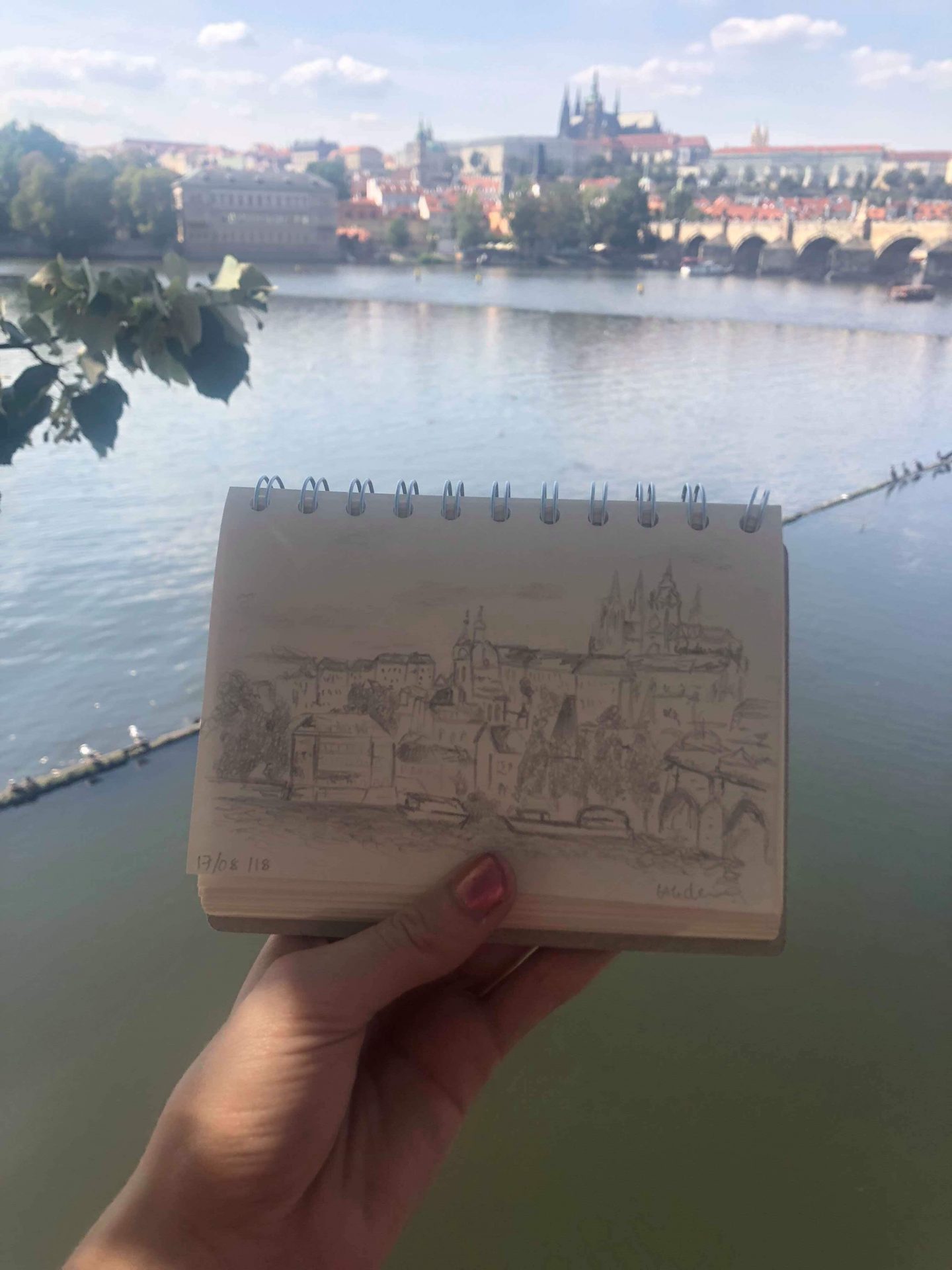 After lots of walking, we made our way back to the apartment to nap and then rustle ourselves up a lovely stir fry to line our stomachs for the evening. Boon had all the information for the evening so I didn’t actually realise that we had also paid for a pre-party with our booking which included unlimited free drinks at a club before the actual boat party. I was extremely thrilled to hear that this was the plan!

The boat party was booked a few weeks prior with the company Boat Party Prague (inventive). After getting all dressed up we made our way back to the old town. Walking past the river, we saw an otter which was amazing and seeing the sun set briefly whilst we rushed to where we needed to be was stunning. 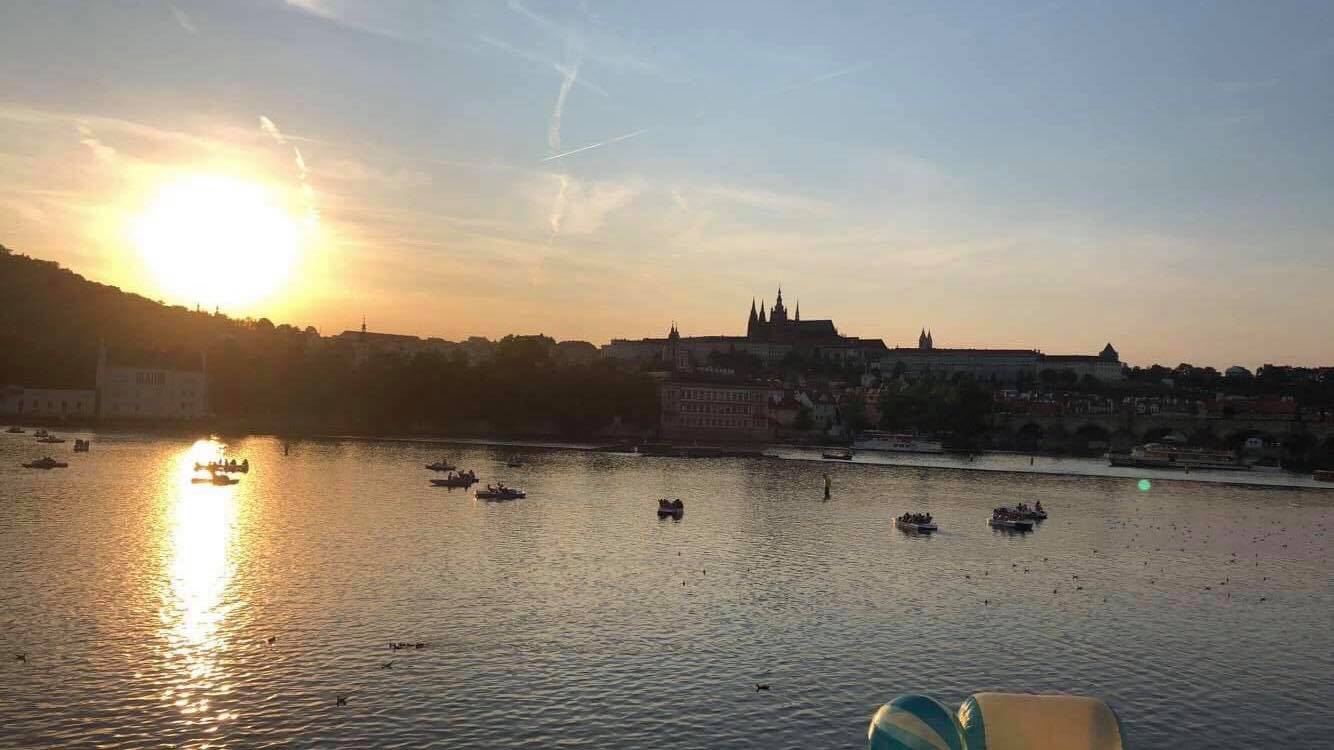 We finally made it to the club which was underground and called Kraftwerk. We were met by the team who gave us wristbands and as it was a glow in the dark party we were given plenty of glow sticks. I was so impressed with the whole set up. There was a dance floor with THE BEST dj playing all the bangers, a beer pong table, sofas, jenga. It was all going on and we were having the time of our lives living it up on the dance floor. After about an hour we had finally managed to get over to the beer pong and also make friends with a stag party which was a bit of a wild experience to say the least. By the end of the pre-party, my playsuit was ripped, we had become members of the stag party and were several vodkas down and this was only the beginning!

Considering we were on the river for a few hours, I literally don’t think I saw any sights but despite this I had the best evening with the girls. It was such a social evening and we bonded with so many people. Our night came to an end about midnight, where we decided it would probably be best we got some sleep ready for the zoo the next day but I think the ticket gives you free entry to some of the clubs so you can definitely keep partying the night away if you’re not done.

The whole day was absolutely amazing and to see Prague at day and night was so special. I would recommend the nightlife and in particular this boat party because it was no doubt one of the best night’s out I have ever had and you are guaranteed to meet lots of weird and wonderful people!